Removing Seeds from the Heaviest Pumpkin Ever Grown in New Zealand

When to Remove Giant Pumpkin Seeds?

So you have a giant pumpkin that you grew or got your hands on one. And you want to get the seeds out of it.

Well, if you know exactly when it came off the vine, you could probably wait a bit.

It depends on what your plans are for the pumpkin.

Conventional wisdom will say get the seeds out of the pumpkin as soon as possible. The longer they are in there, the more likely something could happen inside.

Until they create a pumpkin X-Ray machine (hmmm that could be an idea) if you need the seeds, get them out as soon as possible.

How to Get Into a Giant Pumpkin?

If you asked a handful of people that have never grown or got inside a giant pumpkin before I can guarantee one answer you will get is you must need a chainsaw.

I’ve heard this a lot.

Luckily, it isn’t true. While cutting a pumpkin open with a chainsaw is fun. It isn’t necessary.

It All Comes Down to Wall Thickness

A giant pumpkin is easy to cut with a knife. To get a hole into the pumpkin, you need a tool long enough to cut right through the wall of the pumpkin. 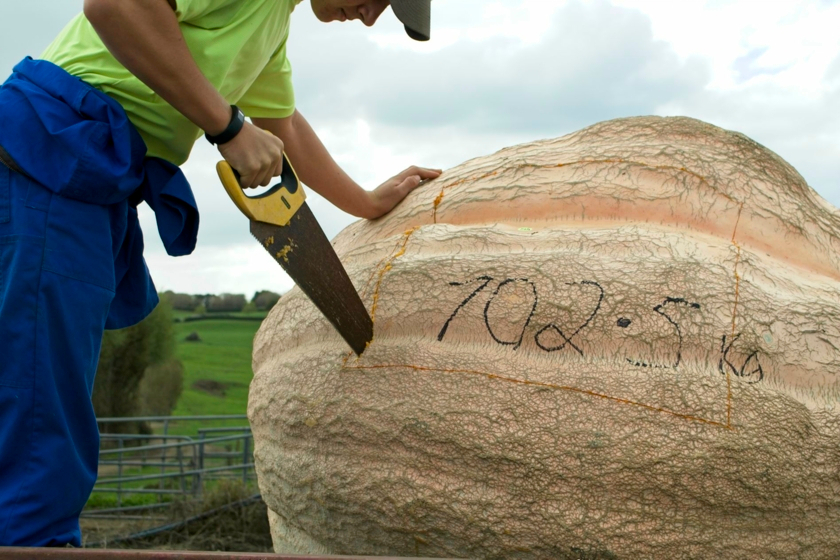 You can push it straight into the pumpkin and cut where you need to.

Smaller pumpkins, you can use a long knife. Take care not to cut yourself when opening up a pumpkin.

How Many Pumpkin Seeds are Inside a Giant Pumpkin

This is an interesting question. I always thought the bigger the pumpkin, the more seeds it would have. It makes sense. 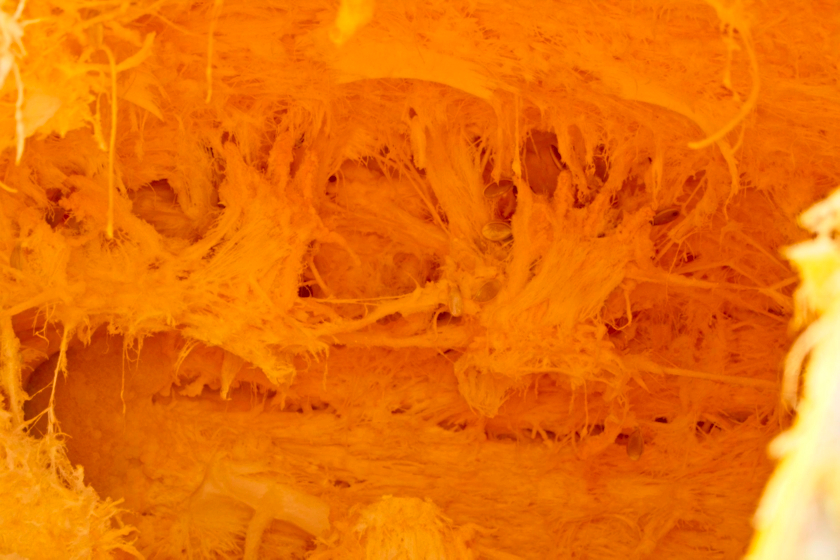 But over the years I’ve seen many different amounts. In fact some of the biggest pumpkins I’ve ever seen hardly have any.

When opening pumpkin, no matter the size, make sure you are thourough in getting the seeds out. Especially if you are wanting to save the seed to grow or share.

Luckily I was able to see Tim and Alex’s pumpkin being opened for seeds.

I know Tim was really keen to blow his pumpkin up. Trying to do that properly is almost impossible. He also learned that the pumpkins are too heavy for most helicopters. Dropping one from a great height was out of the question as well.

Instead, they sat on back of the farm trailer. Allowing easy delivery to their intended destination. The cows. 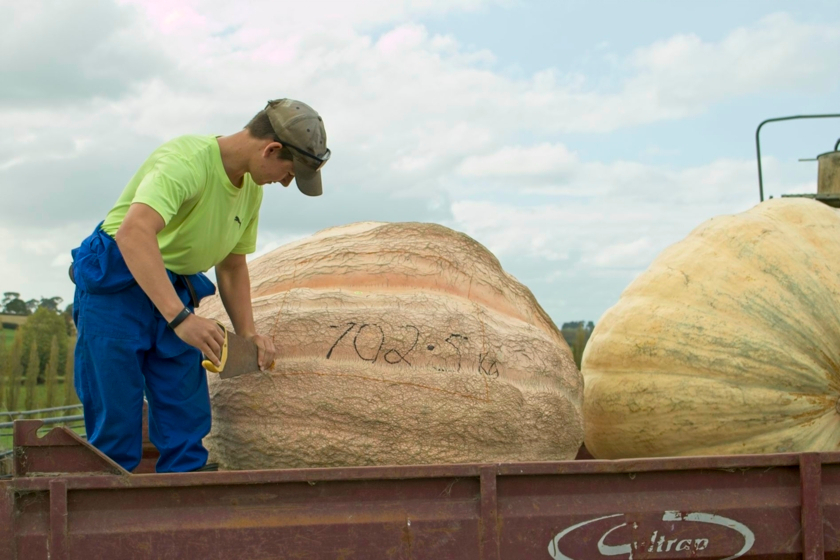 Pumpkin with a Missing Stump

The first thing I did was look at the pumpkin patch. While it was overgrown with grass and weeds, which is to be expected. I didn’t expect to see a giant pumpkin.

First up was Alex’s pumpkin. It came in at 702.5kg on the scales and was a new personal best for him. 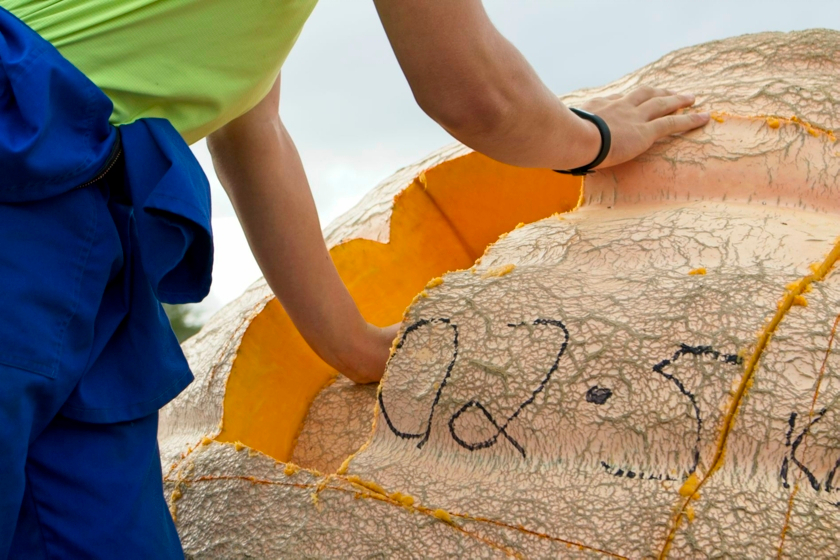 The hand saw made light work of cutting through the thick walls of the pumpkin. Some parts were up to 10 inches thick. 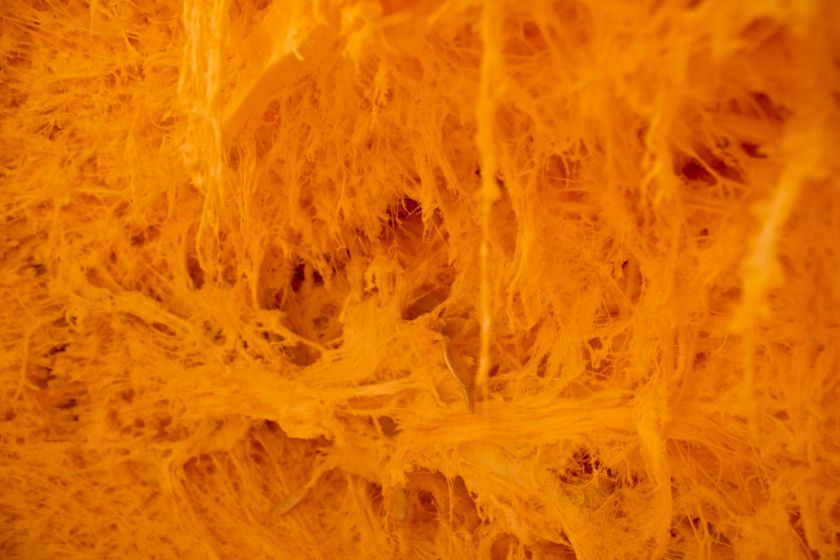 Inside were all the pumpkin guts you would usually expect inside a giant pumpkin this size. And a lot of seeds. Nice fat plump seeds, ready to be dried out to grow next season.

In what is a tradition for Alex, he got inside the pumpkin to make sure he got every single seed.

While Alex was busy inside his pumpkin, it was time to get into Tim’s and see what it contained. This pumpkin came in at 844.5kg and is the current New Zealand pumpkin record. But in fact it isn’t the heaviest pumpkin Tim has grown. It is the heaviest that stayed together and made it to the scales.

Unfortunately, this pumpkin had almost no seeds inside it.

Does the pumpkin just focus on growing and not producing seeds? Maybe.

Or it might be a genetic thing. Whatever the case, there were probably around 6 good seeds.

A lot less than what Alex ended up with. Check out this video to see the removal of seeds.