This post is thanks to Gareth who sent through a link via Facebook to the Guinness world records page which has a good number of pumpkin related records, check these out:

Farthest Distance to Fire a Pumpkin

Here is a video of that cannon breaking a world record, just not the world record mentioned above.

The pumpkins were carved by schoolchildren throughout the Calgary region, stored in refrigerated trailers and then lined up at the Calgary Corn Maze by Save-On-Food employees. 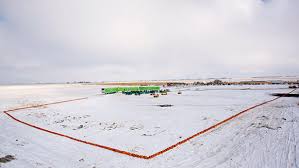 The most people carving pumpkins simultaneously is 1,060 and was achieved by Galloping Grace Youth Ranch and the citizens of New Mexico (USA) in Rio Rancho, New Mexico, USA, on 26 October 2013.

Most Pumpkins Smashed in One Minute

The most pumpkins smashed in one minute is 11 and was achieved by Ben Shephard (UK) on the set of This Morning, ITV, London, UK, on 29 October 2010.

I couldn’t find a video of the actual current world record, but I did find this attempt which is still to be verified and was of 15 getting smashed in one minute.

Fastest 100m in a Pumpkin

Fastest Time to Carve One Pumpkin

The jack-o’-lantern is required to have a complete face, including eyes, nose, mouth and ears.

Couldn’t find the exact video of Stephen Clarke carving the one pumpkin, although he has other record for carving, but did find this guy on Youtube who reckoned he could do it faster.

Fastest Time to Carve One Tonne of Pumpkins

The diameter of the pie was 6 m (20 ft). The crust was made of 440 sheets of dough and the other ingredients were canned pumpkin, evaporated milk, eggs, sugar, salt, cinnamon and pumpkin spice.

Most Pumpkins Carved in One Hour

David Finkle (UK) carved 102 pumpkins in one hour on the BBC’s Countryfile programme in Colchester on 7 October 2010.

The Countryfile team had prepared 70 pumpkins for David Finkle to carve, but in just 20 minutes David had already carved 40. Once David had broken the previous record he decided he wanted to try for 100 pumpkins. The crew and his family then hollowed out pumpkins as he worked so he could continue. He stopped carving 59 minutes when he was certain that he’d carved over 100. Claire B adjudicated.

No video of his world record, but here is a video of him discussing how he carves faces into pumpkins.

This record has also been held by Stephen Clarke in the past and is sure to be challenged again in the future.

What record would you have a go at breaking above?  Or would you think of something else to try with pumpkins?   Let me know in the comments below.