Chris Kent’s amazing world record breaking giant watermelon at 350.5 pounds. Check out the video of the weigh off here.

2328 Pound Giant Pumpkin – Biggest Pumpkin in the World so far

The largest pumpkin grown in the world so far.

Well, that didn’t take long to break the world record again did it? Ron Wallace and his world record 2009 pound pumpkin Ron is a big name is the giant pumpkin growing circles in the US and is well known around the world, his brother Dick is also up there and no...

New World Record Giant Pumpkin – For the time being

It is that time of year we all love, it is pretty much the start of the season here for us, where we actually get to plant something and watch it grow. For the northern hemisphere growers it is coming to the end of the season, with the many way off’s occurring... 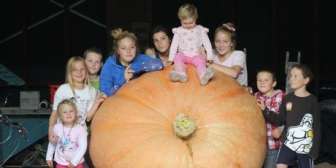 Jim and Kelsey Bryson have broken the world record for heaviest pumpkin.

A new world record for heaviest pumpkin has been achieved, Chris Stevens achieved this at the Stillwater Harvestfest and Giant Pumpkin Weigh off.