I was lucky enough to check out what Tim is growing in his patch yesterday and man is it exciting.  I had a video malfunction yesterday so no video of the patch, but I did take some photos, here is one with Tim. Not even his largest pumpkin

A few questions and answers

GPNZ – How long have you been growing for?
Tim – This will be my third season

GPNZ – What got you started in growing giant pumpkins?
Tim – The RD1 competition and then caught the bug

GPNZ – What have you done differently this year that you didn’t do last year
Tim – Water system is different this year, 90% of watering is done on the ground with the use of drip tape.  More training of the vines this year and more balancing of the soil via the soil test.

GPNZ – What would your tips be for any new grower getting started in growing giant pumpkins?
Tim – Research, lots of research.

GPNZ – Have you thought about growing anything else giant?
Tim – Nothing else really, going to give giant watermelons a real crack next year. This is the start of the stem on Tim’s biggest pumpkin, it’s hard to tell in the photo but this thing is huge. One of the pumpkins behind the sea of vines and leaves 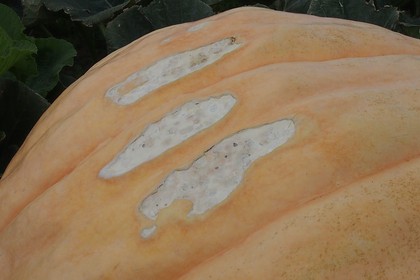 Some marks from where the pumpkin got some damp spots on it from being covered, all hard and solid now though. A can for size comparison, this is a small pumpkin in Tim’s patch Looking over the giants shoulder out to another giant.  How big will the biggest one grow?  Only time will tell. Small pumpkin not needed thrown in the paddock next door.

How big is his biggest giant pumpkin?  Well…………. I’m not going to tell you that, I like to keep people in suspense, but what I will tell you is that it is currently putting on around 30 pounds (13kg’s roughly) a day!!!

It has decided to have a growth spurt late in the season, and if all goes well (fingers crossed, touch wood) it won’t split and will be something pretty epic by my account.

So if you want to see how Tim goes with his pumpkins, make sure to come along to The Great Pumpkin Carnival being held on the 30th of March, Hamilton Gardens, all the information is over at www.thegreatpumpkincarnival.co.nz

A big thanks to Tim and taking the time out of his day to talk pumpkins and show me his patch.